The Pride and Shame of Pakistan

August 15, 2022
Pakistan is close to my heart - its the native place of my ancestors and the birthplace of so many  legends in Sikh History- Guru Nanak, Guru Arjan, Bhai Mardana, Mian Meer, Sheikh Farid, Bulley Shah, Maharaja Ranjit Singh, Hari Singh Nalwa, Diwan Mulraj, Sardar Bhagat Singh, Milkha Singh, and so many more. Some of the most sacred Sikh shrines are located here - Nankana Sahib, Kartarpur Sahi, and Punja Sahib, etc. Genetically I am closer to my brothers in Pakistan than I am to the South Indians. My Ancestory.com genetic test revealed 70% West Punjab/Afghanistan and 30% East Punjab in my genes. This makes Pakistanis my cousins by blood. But then why do they consider themselves closer to the Arabs, and not to me?

The sacred land of Pakistan boasts of the advanced civilization of Indus Valley, initial homeland of Indo-Aryans who composed Vedas on this land, Panini wrote the first grammar in the world - Sanskrit here, Buddhism flourished here at Taxila, and this was the place where Alexander The Great was conquered, Mongols were defeated here, Ranjit Singh pushed Afghans out of Punjab forever, and the British were routed at battle of Chillianwala by Sikh armies supported by Punjabi Mussalmans.

Porus the king of West Punjab stopped the juggernaut of Alexander of Macedonia at Jhellum, forcing him to retreat back to the safety of Susa in Iran. Then why don't we see Pakistani parents name their children after Porus? But it is common to find Sikandar Khans or Sikandar Bakht.

Jasrat Khokhar of West Punjab challenged Tamerlane or Taimur, the Turk. But why don't his ancestors take pride in his bravery? But you can find Pakistani history books hail Taimur as a hero but hey forget that Taimur ransacked Pakistan, plundered villages, and killed and looted their ancestors. Even Pakistani Navy named the 134m-long Chinese-built frigate warship after this marauding invader as PNS Taimur.

Raja Jayapala and his son raja Anangpala of Janjua Rajput dynasty fought Mehmud Gazanavi for decades but Pakistan names its missile after its conqueror Gazni and Ghosri. Why not name it after Jaypala whose descendants Janjuas still live in Pakistan?

Pakistan's history books glorifies the Mughals, specially Aurangzeb but they forget Dulla Bhatti who stood for his family honor and challenged the Mughals.

These are just a few examples of the slave mentality of Pakistan's leadership who hero worship thier conquerors at the expense of  their own ancestors, like Porus, Jasrat Khokhar, Jayapala, Dulla Bhatti, or Maharaja Ranjit Singh of Gujranwala.

Pakistan means 'The Land of the Pure'. Pure of what? Pure is the word and Arabization is the synonym.
Pakistan – the cradle of one of the most ancient Indus Civilization – has been suffering from the identity crisis since its independence in 1947. Plagued by centuris of slavery, the Pakistani state was quick to embrace the pan-Islamic republic identity whilst cunningly blending it with religion in order to separate it from India and render it more acceptable for the devout populace.

The most common but glaring example of this 'Arabization' is the gradual replacement of the Indo-Persian ‘Khuda Hafiz’ with Arabic ‘Allah Hafiz’ implying that Arabic Allah is the only proper word for God.  Khuda is an Indo-Persian term to say God. Renowned scholar Dr Pervez Hoodbhoy sheds the light on the issue: "The morphing of the traditional “Khuda hafiz” (Persian for “God be with you”) into “Allah hafiz” (Arabic for “God be with you”) took two decades to complete. The Arab import sounded odd and contrived, but ultimately the Arabic God won and the Persian God lost.”

The erosion of self pride is not new and it has been happening for centuries. The natives of Pakistan speak Punjabi, Sindhi, or Siraiki but they write it in Persian script. They have forgotten the scripts of thier ancestors and adopted the language of their conquerors.  They should take a lesson of self-pride from Bngladeshis who are also Muslims but have not abandoned their mother tongue Bengali.

Punjabi, Siraiki, Sindhi, or Balochi is not taught to the children in schools instead Urdu is promoted. This will vanish the local languages and dialects forever from Pakistan. The Urdu language is a product of the Indo-Persian culture, as it is a hybrid of Persian and Sanskrit languages. The wide literature of Urdu exemplifies its cultural value and its literature can be considered a joint heritage of Muslims and Hindus. Thus, it provided another literary platform for unity among Muslims and Hindus. But when combined with religion, it can be used as a weapon to wipe out the native languages.

While I am not against the renaming of Lyallpur but we need to understand why? Lyallpur was named after Sir James Broadwood Lyall, a British Lieutenant Governor of the Punjab between 1887 and 1892. Lyall was instrumental in f transforming 6,000,000 acres (2,400,000 ha) of desert into agricultural land through the development of canals. He also established Lyallpur, one of the first planned cities in British India, This brought in prosperity to the people of the region and agriculture and trade flourished giving employment to millions.

Instead of showing gratitude for his vision and prosperity brought by the canal colonies, Pakistan chose the eliminate his name from history. More shameful is their choice of the new city, named after the Saudi King Faisal bin Abdulaziz Al Saud (Arabic: فيصل بن عبدالعزيز آل سعود

I would call it an abhorant example of sycophansy and slave mentality. They could have chosen the name of a local hero but the sycophants in Pakistan government chose to rename it after an Arab.

How about naming of Cricket stadium in Lahore aftera tyrant like Muhammar Gaddafy? Why not name it after a Pakistani Cricket legends like Fazal Mahmud, Hanif Mohammad, Mushtaq Mohammad, Zaheer Abbas or Javed Miandad?

Another alarming trend that I have noticed is the abandonment of traditional "Chunni" or "Dupatta" in favor of Arabic "Hijab". Punjabi and Sindhi Muslim women historically did not adopt the "Burqa" or "Naqab" or the "Hijab". They had "Chunni: or "Dupatta" as their own head covering that gave them dignity for centuries before Islam arrived here. The use of Hijab in Pakistan and India is a more recent phenomenon probably influenced by menfolks going to Arabic countries for work.

I hope my mutterings on this topic is seen a an advice of a kin. I am not a stranger to the Pakistanis, who are my friends and borthers united in our love for our land,  language and our shared heritage. My best wishes on the Pakistan Independence Day! 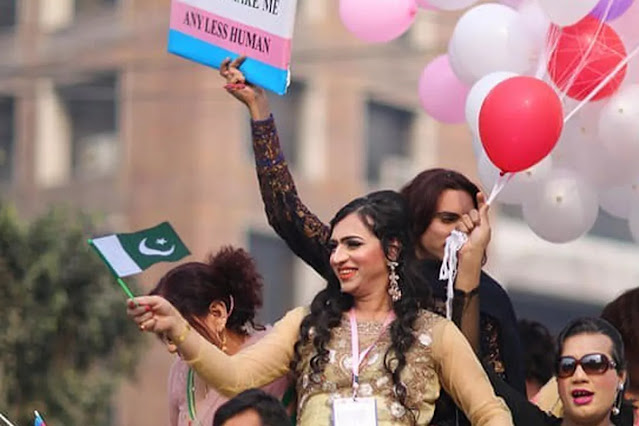