Afghanistan (meaning "Land of the Afghans") owes its name to the native people's association with Indian roots. It comes from the Sanskrit term "Asva-Gana" which literally means the people of horses. Let's look at the Indic roots of Afghan people with undeniable historic evidences from various parts of the country. I am only going to use the coins of rulers from Afghanistan as evidence and not go into details of the ruins of Hindu and Buddhist temples and Stupas from the region.

The Khalaj are classified as a Turkic tribe from Afghanistan. The Khalaj were described as sheep-grazing nomads who had a habit of wandering through seasonal pastures. They are considered as the remnants of the Hephthalite confederation that invaded the region during the 5th century AD. Before their conversion to Islam, the Khalji practiced Hinduism, Zoroastrian,  and Buddhism.

11th-century book Tarikh Yamini, written by al-Utbi, states that  Ghaznavid Emir Sabuktigin defeated the Khalaj and the tribe agreed to serve him after conversion to Islam. Khalaj and Pashtun tribesmen were recruited in significant numbers by the Ghaznavid Sultan Mahmud of Ghazni (999–1030) to take part in his military conquests of India. In 1197, Muhammad bin Bakhtiyar Khalji, a Khalaj general in the army of the Ghurid Sultan Muhammad of Ghor, captured Bihar and Bengal and established the Khalji dynasty of Bengal (1204-1227). Jalal-ud-din Khalji (1290-1296) founded the Khalji dynasty, which replaced the Mamluks and became the second dynasty to rule the Delhi Sultanate. Jalal-ud-din was ultimately assassinated by his nephew Ali Gurshasp, who subsequently ascended the throne as Alauddin Khalji. The Khalji, or Ghilzai are one of the largest Pashtun tribes in Afghanistan today.

Evidence 1:Coin of Tegin Deva Shah, King of the Khalaj, dated to the year 728 CE.

Evidence 2: A Khalaj coin of the 8th century CE

Obverse: Sasanian king Peroz I (438-457), whose crowned bust appears on the obverse.

In the 10th century, Kabul and surrounding region was occupied by the Rajput tribe of Gakhars, who formed a large part of the Hindu Shahi army of Kabul. The Hindu Shahis were mainly Gakhars from the region of Chhachh in Gandhara. They followed Hinduism and hence also referred to as Hindu-Shahi.

Shāhi dynasty of some 60 rulers governed the Kābul valley and the old province of Gandhāra from the decline of the Kushān empire in the 3rd century AD to the time of Maḥmūd’s invasion of India from Ghazna (modern Ghaznī, Afg.) in 1001 AD. The Shāhis maintained a hopeless resistance against Maḥmūd’s forces and eventualy fell in 1021. They were so thoroughly extinguished in Afganistan that 30 years later the commentator Kalhaṇa said that men wondered whether they had ever existed. The historian al-Bīrūnī also noted their disappearance and paid high tribute to their nobility of character.

Bhimadeva successfully managed to ward off danger from the Samanid Turks during his lifetime. When he was getting old, he appointed Jayapala Deva as his successor in 864 AD who shifted the capital to Peshawar and Kabul fell to Ya'qub ibn al-Layth of Turkish Saffarid dynasy in 870 AD. Later Mahmud of Gaznavid dynasty captured Kabul from the Saffarids and then defeated Jayapala Deva, the last Hindu ruler at Peshawar. This completed the Islamization of Afghanistan.

Obverse: Bull with trisula mark on the hump, with Nagari legend: Śri Spalapatideva "Lord Commander-in-Chief". Reverse: Horseman with a in Nagari to left and symbol to right.

Bhimdeva of Hindushahi dynasty is revered for his gallantry and political acumen. He successfully pushed back Arab and Turkic invasions of Kabul.His territory extended from Kashmir to Bukhara in Uzbekistan,

By the middle of the 10th century, Turkish slaves began to acquire power in the Samanid kingdom and frequent battle for Bamiyan was reported by Persian historians. Bamiyan had numerous attacks from Islamic Turk slave Alptagin and his son Abu Ishaq as it was a well known center of Buddhism.

Obverse: Bull with trisula mark on the hump, with Nagari legend: Śri Samantadeva. Reverse: Horseman with bhī in Nagari to left indicating Bhimadeva and symbol to right.

Zabulistan (Persian: زابلستان, Pashto: زابل Zābəl), was a historical region in southern Afghanistan roughly corresponding to the modern provinces of Zabul and Ghazni. Following the Ghaznavid rule (977–1186), "Zabul" became largely synonymous with the name of its capital and main city, Ghazni.

During the pre-Islamic period, Ghazni was inhabited by Pashtun tribes who practiced Zoroastrianism, Buddhism and Hinduism. In the 6th century BC, it was conquered by the Zoroastrian king Cyrus II and incorporated into the Persian Empire. The city was subsequently incorporated into the empire of Alexander the Great in 329 BC. By the 7th century AD, the area was a major center of Buddhism. In 644, the Chinese pilgrim Xuanzang visited a city named Jaguda—which was the contemporary name of Ghazni. Hinduism flourished here during the reign of Hindu Shahi dynasty from Kabul.

The pre-Ghaznavid royal dynasty of Ghazni were the Lawiks, a Hindu dynasty. Afghan historian 'Abd al-Hayy Habibi Qandahari recorded that the great mosque at Ghazni was earlier a great idol-temple built in honor of the Rutbils (Rajputs) and Kabul-Shahis by Wujvir (Vrujvir) Lawik, the king of Ghazni. When his son Khanan converted to Islam, he was sent a poem by the Shah of Kabul saying, "Alas! The idol of Lawik has been interred beneath the earth of Ghazni, and the Lawiyan family have given away their royal power. I am going to send my own army; do not yourself follow the same way of the Arabs."

Habibi continues stating that Khanan later reconverted to Hinduism, the faith of the Hindu-Shahis. The Hindu Shahis king Jayapala, sent his son to assist Lawiks during the invasion by Turks. When the allied forces reached near Charkh on Logar River, they were attacked by Turk leader Sabuktigin who killed and captured many Lawik warriors and became ruler of Ghazni in 977 A.D. The people of Ghazni were converted to Islam and the idol-temple was destroyed and a mosque was built in its place. 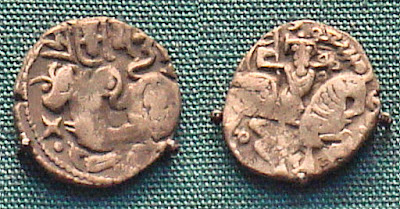 The design of the coin is derived from Hindu Shahi coins.

Obverse: Hindu inscription in Devanagari script with the sacred bull - Nandi
Reverse: The name of Mas'ud (Persian: مسعود) around the head of the horse rider.

The remnants of ancient Hindu and Buddhist temples an be seen all around Ghazni. Here is an example of a Buddhist Stupa:

The Sikh and Hindu natives of Afghanistan are driven of the country by radical groups. The attacks on Gurdwaras and Sikh businessmen have increased forcing this tiny minority to move to India for safety.

Now who is going to educate these uneducated and ignorant radicals that these Sikhs and Hindus did not come from Punjab and they are the descendants of original natives of Afghanistan. By killing them, you are destroying a piece of your own history ... but may be that's what they want?