The uniform of a security force should be in sync with its role and its environment. As the Punjab Police grapples with its anti-people image crisis due to the hangover of the militancy days in the state, being labelled as an instrument of the ruling parties, and an aged blue and red uniform that is remnants of the colonial era.

This blog is not going to cover all the ills with the Punjab Police but discuss the public perception of it being being anti-Sikh, instrument of the ruling parties, corruption at all levels, alcoholism, and not forgetting the fitness of the force that used to be the fittest and most athletic of all Indian police.

To control all colonies of the empire, The British colonial rulers  created modern institutions of governance for their subjects. The institution of the police was one such tool to control the natives. The British colonizers used Indian Police as weapon for surveillance, domination, and oppression of the native Indians. The system of policing in India as seen today is not merely the product of a colonial past, it is a crudely morphed into an oppressive force to dominate and oppress its citizens.

The Punjab Police was their model force. It was used not just in Punjab but also in Delhi to govern the nation's capital. It was used as the strike force when local police failed to deliver of British did not have confidence in their abilities.

Many people find it hard to believe that police brutality continues be an integral part of policing in Punjab, in spite of 74 years of independence and selection of police officers from IPS cadre which brings in highly educated people, selected through one of the toughest exams in the world.

Most Indians are familiar with highhanded behavior of the police in the form of the cops slapping people or, if they are pretending to manage law and order, beating them mercilessly with their sticks (lathis). This is not a macho problem of Punjab Police, the women officers of Punjab Police are also trained and behave the same way.

However, the real face of Punjab Police brutality often remains an subject of concern during the dark period of 80s and 90s. The perception about police brutality derived largely from what have been seen in films – and the victims know the truth in rural Punjab.

Steve Coll, a former editor of the Washington Post in his work On the Grand Trunk Road: A Journey into South Asia (pp.167-72), narrates how he had a revealing conversation with K.P.S. Gill sometime before 1993. He was taken aback that Gill downed at least seven tall glasses of whiskey within an hour. This kind of irresponsible behavior trickles down to the cadre.

The ‘Dil Le Gayee Kudi’ singer Jasbir Jassi shocked everyone with public disclosure that former Punjab Police DGP KPS Gill kidnapped him and forced the singer to perform for him while he enjoyed his glasses of whiskey. The singer escaped and quit his job as Punjab Police constable.

This kind of bad behavior by the senior officers trickles down to the cadre on the beat. More dangerously, in the absence of any guidelines regarding human rights, caste sensitization and crowd control training, personnel reported receiving either no training on these at all matters or in the case of those with more than five years of experience – at the time of joining the force.

Amritsar-based historian Surinder Kochhar lamented to the Punjab Deputy Chief Minister Sukhbir Badal that even after 67 years of independence, police constables and head constables in the state had to go through an “ordeal to wear the sign of British government slavery”.

India Reserve Battalion IG Paramjit Singh Grewal is also learnt to have raised the issue, advocating that the existing turban be worn only for ceremonial occasions. Grewal has also suggested a normal khaki turban as a replacement.

In Favor Of Red and Blue

In Punjab, the police uniform included blue turbans with a red fringe worn by constabulary to make up the Blue and Red colors of British Union Jack.

Rajdeep Singh Gill, who retired as Director Principal of Maharaja Ranjit Singh Punjab Police Academy (PPA) Phillaur, is among those in favor of retaining the Red & Blue jhaalar wali pugg.

“The blue-red turban with strings is our pride and heritage. While the turban in question is of British era, the blue and red colours for the force have been in use since the time of Maharaja Ranjit Singh. It is due to this turban that police has a distinct identity. Replacing it with a khaki turban would make a policeman look similar to some roadways bus driver or a home guard,” Gill said.

“During my time no policeman raised an objection. I do not think that the turban comes in the way of duty. The French, German and British forces also wear such headgear which makes them look distinct. Even forces in Napoleon’s times used to wear distinct headgear,” he reasoned.

Punjab Police constabulary is 'still stuck with a blue turbans with red fringe introduced by the British. The force need a new branding that reflects the new Punjab Police, a force that serves and protects its people. 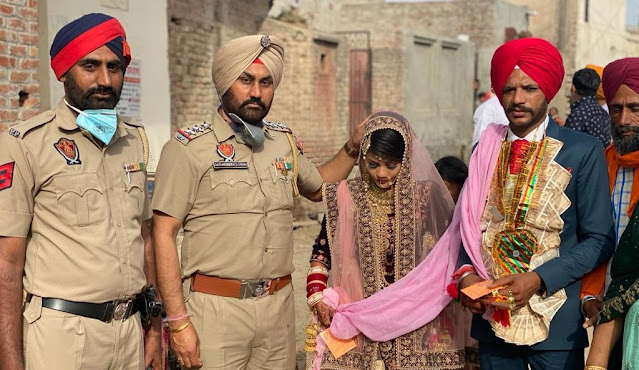 It needs to shun its colonial past and replace Blue and Red with a turban that is contemporary and represents a modern force. It starts with the appearance - a change that is visible and demonstrate the shift from "oppressive force" to "Serving the communities". 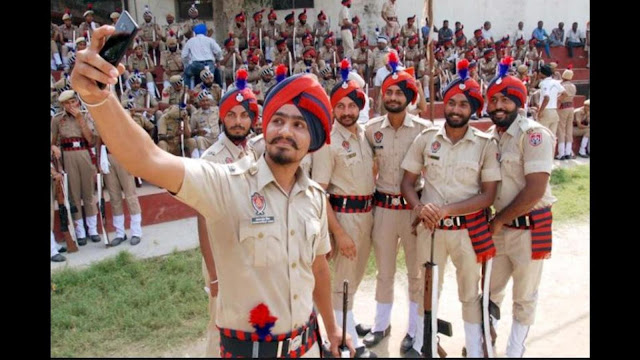 I believe that its time to change the perception of Punjab Police, giving them a new image that reflects their discipline, bravery, athleticism, and their obligation to Punjab. This image MUST include a traditional turban that they can wear with their Punjabi pride and connect with the public.

I would love to see the color of the turban change from blue to Kesari. This will eliminate the decades old conflicting image with the Sikh population. Its also time to change the clerical looking shirt and trousers with a ore athletic gear in use by various modern forces globally.

The attitude, discipline, and the confidence of Punjab Police has to change too not just the uniform and turban but changing the colonial uniform is a good start.