February 10, 2018
Thoha Khalsa is a village of Kahuta Region of District Rawalpindi in Pakistan. The village is located in the South East of Rawalpindi city at the distance of about 30 miles. The language used by its people is Pothohari dialect of Punjabi.The population is about 20,000 consisting Janjua Rajput, Ghakhar, and few others - all Muslims. Current inhabitants may not even know that is was a flourishing village of Sikhs before the partition of India (creation of Pakistan). The village was inhabitated by wealthy Sikh families - Bindras, Duggals, Anands, and Chandhoks.

The Partition Of India

Sectarian violence erupts in Punjab as Muslim League announces partition and creation of Pakistan, a Muslim only nation carved out of India. Sikh leader Master Tara Singh declares opposition to the partition and tears the flag of Pakistan in Lahore. To the dismay of Sikhs and Punjabis, Indian leaders Gandhi and Nehru cave in to the demand of Pakistan.

On the evening of March 6, Muslim mobs from the surrounding Pathan villages entered Thoha Khalsa and gave ultimatums to the Sikhs to convert. On that evening, the impact of their presence was negligible due to the lateness of the hour but the actual clashes started the next morning, when their numbers swelled to some thousands. The local Muslims who had earlier assured safety to the Sikhs, remained mute spectator when violence started.

After resisting for three days, the Sikhs hoisted white flags and negotiated truce with the Muslim mobs. Under the agreement, the mobs will loot their houses but will not burn them, kill men, or dishonor the women. The Sikhs collected Rs. 20,000 and gave to the mob leaders as demanded. They then abandoned their own houses and all gathered in the central Haveli of Sardar Gulab Singh. His mansion was huge with large boundary wall. Others took shelter in the "Dukh Bhanjani" Gurdwara located next to Gulab Singh's mansion.
From Gulab Singh's Haveli, they saw their houses being looted and burned for six days. After looting the houses, the Muslim mob turned to Gulab Singh's Haveli and surrounded it. Their intentions appeared menacing and it was clear that they do not intend to honor the terms of the truce,
But when defeat and dishonor was imminent, Sikh men started to prepare for the battle till death. While their men fought, the Sikh women started gathering near a well around the garden. When just women and children were left, Maan Kaur led all the women to a large well inside the Haveli. She recited "Japuji Sahib" the Sikh prayers and jumped inside the well. Over 93 Sikh women followed her and all committed mass suicide in order to save their honor.

An eyewitness who was a young Muslim boy in the village at that time, recalls the event:
"It was almost after noon, and I watched from nearby with two of my friends. Some of the women held their children in their arms. They sobbed desperately as they jumped into the well. In about half an hour, the well was full of bodies. I still remember when Bhansa Singh killed his wife with tears in his eyes. In the span of some hours, I witnessed the deaths of almost 25 women. It was such a horrible scene. I went closer and realized that those who were on top were trying to submerge their heads so they don't survive. No space remained. A few came up and jumped again. It was a terrible scene. They were determined to die rather than sacrifice their honor."
Description by Sardar Pritpal Singh of Thoha Khalsa, who as a young child attempted suicide along with his sisters and mother but survived somehow.

Raja Masood Akhtar Janjua, himself a Muslim Rajput form the area demonstrates the well where Sikh women committed suicides and how locals believe that any one who killed or looted Sikhs in this village, suffered bad fortune.


Sardar Manmohan Singh Bindra describes in details the entire sequence of events - Muslim mob attacks, fightback by the Sikh men, the mass suicides of Sikh women, and how he himself survived the massacre.

In Thoha Khalsa, on March 12, 1947 after long and heroic resistance, 200 Sikhs were killed.  The women were asked to embrace Islam, but 93 of them, old and young, decided to escape dishonor by drowning themselves in a well, which they did.  The Muslim invaders, aghast at this tragedy, fled from the place.  A little later, the military arrived and rescued the survivors. 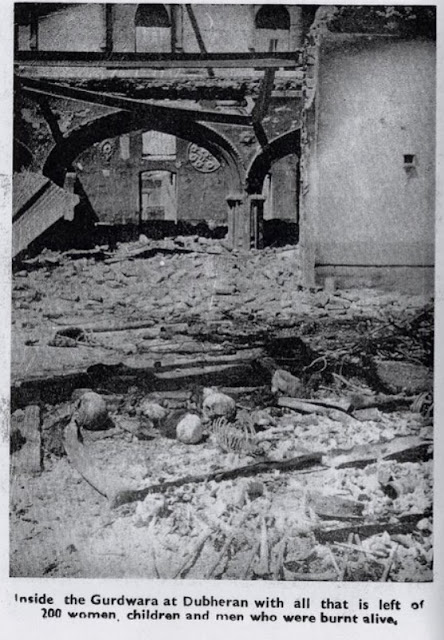 The news of the massacre at Thoha flashed on national newspapers. The Viceroy of India, Lord Mountbatten visited the village to assess the situation firsthand.
He saw the loss of property and life at Thoha Khalsa:
He met with the survivors and heard their ordeal directly:

Lady Mountbatten led the rescue and hospitalization of the victims.
Life survives somehow ... and the survivors reached the safety of refugee camps in Delhi, India and lived to tell their stories.

April 07, 2020
Punjabi Ignorance We, the Punjabis historically have not been documenting our own history. The Muslim Punjabis have almost forgotten their genetic ancestry and now try to connect their gene pool to the Arab aristocracy of Sayeds and Qureshis. The Pakistan government ignorantly names its missiles after the Islamic invaders who dispossessed their ancestors from their land. The Hindu Punjabis have written off their own ancestors, warriors kings, and Gurus and relate more to the Middle-India heroes such as Rama, Krishna, and Shivaji, The Sikhs have done a better job in staying connected to their roots but their historical reach is limited just to the Sikh period. Punjab history has to be taken as a whole, and that includes, Adivasis, Indus valley, Aryan Khatris, Kushans, Rajputs, Gujjars, Jatts, Islamic invaders, Sikh period, British rule, and the post independence era. Trinity of Punjabi Pride What's the Problem? So what? The results of this ignorance is astounding. We never
277 comments
Read more